Ninja Star is a relatively old online slot from developer Real Time Gaming, or RGT. This shows both in its graphics as well as its special features. These days players are looking for slots that have intense 3D graphics and second screen bonus round with a story line. Ninja Star has none of that. It does have a free spins round and a wild symbol though. It also has a large wagering amount, with coin values going from 0.01 up to .50 per line.

The paylines are adjustable, which means that you can play for a very small amount or a rather mediocre amount. This makes Ninja Star a typical penny slot, with a low to medium volatility. The small and medium wins come often, but don’t hold your breath for the big standing jackpot. It can happen, but not very often.

The graphics in Ninja Star are very fast becoming more and more dated. With new games on the market that offer exciting animations and graphics that would not look out of place in a modern video game, Ninja Star comes across as a bit long in the tooth. The graphics are pretty enough, if you like 2D flat, drawn pictures. Behind the reels we can see a glimpse of what appears to be a Japanese temple, while the reels themselves are plain light blue. The symbols are basic, with not much detail.

Everyone loves ninja’s and the thrill and intrigue that they represent. Ninja Star plays on that love of adventure, but doesn’t quite get there. The base symbols in the game are taken from a deck of cards, which definitely has nothing to do with ancient Asian assassins. With all of the paraphernalia surrounding ninja’s, RGT could have a put a little bit more effort into the game. The rest of the symbols are theme related, and we can find a dojo, a logo and two weapons. These are the top four paying symbols, and you only need to find two of them next to each other to get a payout. The rest of the symbols all need at least three adjacent.

The wild symbol in Ninja Star is the actual ninja. This is a dark assassin looking guy who appears on reels one, three and five. He can sneakily take the place of all other symbols in the game except for the ninja star scatter

The Ninja Star scatter will pay out anywhere that they land; they do not have to be in any particular order. Scatter wins are paid out for one or more stars, which are multiplied by the total bet. Three or more Ninja Star scatters will also launch the free spins round, in which you are awarded eight free spins with a three times multiplier. This can be retriggered as often as possible and does happen quite frequently, although its wins are not huge.

Like offers in Election betting Australia, Ninja Star also has a bonus symbol in the guise of a ninja scroll. Three of these from left to right on an active payline will trigger the Ninja Scrolls game. Here you will see a number of scrolls in two rows. The top level of scrolls contain prizes, the bottom ones control your fate. You choose one scroll from the top that will reveal a prize, and the corresponding scroll below it will either let you pick again, or game over. 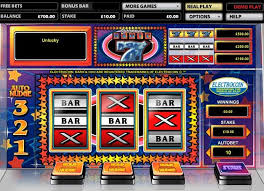